Whether you walk or drive Monticello and Jefferson County are the perfect places to peruse oak lined streets to relive an older, gentler time. With over 600 buildings built before 1920, the area presents a glimpse of life in earlier days. 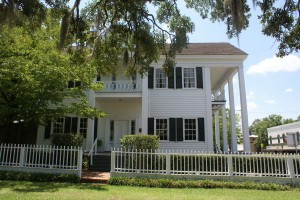 The weekly newspaper subscription was only $2 per year when it began in 1859. Its founder strongly defended Jefferson county and advocated railroad and other developmental interests.

Greek Revival. The two three-bay gable ends face the street and contain separate shop premises which were originally a drugstore and grocery.

Classic Revival style, this building is significant as one of the original Courthouse Circle buildings.

Erected by Hiram Lodge No. 5, F.A.M., the building had a theater on the first floor where local residents could enjoy the exciting new invention of moving pictures.

Greek Revival design with three bay portico and large masonry Doric columns. This is one of few remaining Greek Revival religious structures from the mid-19 century in Florida.

Classic Revival built by Smith Simpkins, a lawyer who served as a Jefferson County sheriff and ex-officio tax collector in the 1840’s.

Classic Revival built by Mr. Dilworth, a prominent attorney who once commanded all confederate troops in the district of middle and east Florida during the Civil War.

House (1856); Greek Revival, built by a tobacco warehouseman and son of one of Monticello’s earliest citizens. It is the latest true Greek Revival style dwelling in town.

Classic Revival with a Greek Revival influence unusual in this type of home during the period.

Classic revival, built by John A. Cuthbert, a prominent local leader who helped to found the Masonic Lodge in mid 1830’s and was active in local political resolutions calling for the establishment of a state government.

Geometric pattern of Classical Revival with applied Stick style which departs from Episcopal architecture during this period. Designed by J. W. Ferguson, reportedly the architect for the New Orleans Exposition , and D. A. Finlayson.

Budd-Pafford House (1833); Classic Revival built by William Bdd, an early Monticello resident and prominent merchant. Occasionally called “Gulf Coast Vernacular style”, the house is a stylish link to other parts of the South.

“I” style, built by Thomas L. Clarke who served as a state legislator and delegate to the Constitution Convention of 1885.

The town of Lloyd is located ¼ of a mile south of Exit 215 on Interstate 10. The Lloyd Historic District was placed on the National Register of Historic Places in 1991. Lloyd’s historic significance centers on architecture, archeology, trade and transportation. Highlights of the district include the Lloyd Depot, the oldest brick depot in the state, and the Lloyd-Bond House which served as a hospital during the Civil War for Confederate soldiers who were wounded in the Battle of Olustee. For more information about the Lloyd Historic District contact the Lloyd Community Preservation Trust, P.O. Box 175, Lloyd, FL 32337.

The tour begins at Hwy #59 South at Exit 215 on Interstate 10. Travel south on #59 a fourth of a mile to the flashing light at Bond Street. Turn left onto Bond and then right onto Main Street to the Lloyd Depot which is now the Post Office.

The Lloyd Depot is one of only two surviving antebellum depots in the entire state; it is the oldest depot in the state and the second oldest building in Lloyd. The masonry vernacular one story brick building was erected by Pensacola and Georgia Railroad to provide the cotton producing county access to Atlantic and Gulf coast seaports. Decline of use began with the boil weevil infestation and the growth of highway transportation. Across Bond Street and slightly to the east once stood Whitfield House, the train passengers’ dinner stop. The depot was given by the Jefferson County Historical Association to the Gulf Wind Chapter of the National Railroad Historical Society who with small grants and much work is restoring it for community use. Listed on National Register in 1973

A modest but appealing three bay frame vernacular with Classic Revival features, this house was built by Frank Taylor, a watermelon grower, for his mother and flower loving sister, “Miss Posey”.

The original house was four rooms on a central hall. In 1882 Walter Lloyd Bond added an upper floor, a two room wing to the east and galleries the length of the north and south walls.

Built by Henry Bond as a Grange Hall, the building became the area school until a larger one was built. It was then deeded to “Holy Trinity Church”, serving Methodists and Episcopalians. Today, Methodists still regularly meet here.

Reflecting the times in which it was built, Craftsman-style touches were added to this basically frame vernacular structure.

Built at a later date than the Historic District, this structure is listed on the National Register on its own merits. Erected in 1939 through the efforts of the Home Demonstration Club, it was the place from which many civic improvements were planned and executed.

Marion Walker built this frame vernacular house in 1910. He and his wife, Ethel, were both involved in many civic and business ventures.

This frame vernacular house was near ruin when its present owner began repairs. It is a fine example of a do-it-yourself restoration.

This home was built by the sister of Walter Lloyd, founder of Lloyd, from plans in Godey’s Lady’s Book.

This house is the oldest structure in Lloyd. The Lloyd family moved two double-pen cabins to this property and placed them porch to porch adding an addition between the two porches to create a center room. It served as a temporary Confederate hospital for soldiers wounded in the battle of Olustee. The house was also used as a private school for neighboring children. Listed on National Register in 1984

This frame vernacular one story house was built by George Elliot Dennis, a prominent cotton planter in Jefferson County. It has two interior red brick chimneys, side gables and a crimped seam metal roof. Listed on the National Register in 1988

After a fire in 1912 destroyed most of Lloyd’s commercial center, Richard Laffitte rebuilt this structure which served a store and pharmacy. It now belongs to the Lloyd Community Trust, which has almost completed its restoration. According to the State Preservation Board it is a “fine example of a typical commercial building in a small trading center”.

Mr. Willie built this house during Lloyd’s heyday as a commercial center. The house is the best local example of the Craftsman style. Note its short squared columns, brick tiers rising from the ground and knee braces under the eaves.

A merchant when Lloyd was at its zenith as a farming and lumbering area, Mr. Yon built this house in the serviceable frame vernacular style without the Craftsman touches.

Although there is not documentation, tradition holds that W. A. Willie, a county commissioner, moved a log cabin into town and had it sheathed over. Today the structure serves as a comfortable family home.

Dr. Tom Edwards built this house as a home and office. Its style is unique in Lloyd but not unlike contemporary Georgia structures.

Richard Laffitte built this house originally by his store near the depot. Luckily it was moved to its present location before the 1912 fire. The house now belongs to the Lloyd Baptist Church, who has restored it for use as church offices.

African Americans have made up a substantial portion of Jefferson County’s population since the earliest days of the county and have played an important role in county affairs. Particularly important was their continuing effort to establish schools for the education of their children during the late 1800’s and early 1900’s. For more information consult Dr. Flossie Byrd’s book Education in Jefferson County Florida in Historical Perspective, 1997 Jefferson County Retired Educators Association.

Robert Meacham, who served as a state senator from Jefferson County from 1868-1878, founded the original church on this site. It was the site of the first Freemen’s school in Monticello. After the original church burned the present building was built in 1975.

The two original Howard Academy buildings burned and African-American students were taught in local churches and the Masonic Lodge until the two buildings on this site were built. The smaller was used for all grades until the larger building was built to instruct high school students. There is a Historical Marker on Mamie Scott Drive in front of the larger structure.

After the original Bethel AME Church burned, this two story wooden structure served as their worship hall. When the original Howard Academy in Rooster Town burned it was used as a schoolroom until the new school on Chestnut Street could be built.

This three room vernacular shingle clad building was built on land donated by Miles Groover and his wife Daisy Black Groover. As enrollment and interest increased funds were raised by the African-American families to begin construction. Once the foundation was built the structure was completed as a WPA project. The school originally taught grades 1-12. When transportation became available to take high school students into Monticello, it continued as an elementary school until 1962.