The Flat Woods of Jefferson County Florida are a world out of time. This remote and mysterious area is almost impenetrable and unknown except by a few hunters, fishermen, and scientists. The Flat Woods are located in South-central Florida, at the edge of the Apalachee Bay and the Gulf of Mexico.

These remote tangled woods and swamps are bordered on the east by the Suwanee River and on the west by the Wakulla. The area is split by the mysterious, disappearing Aucilla River and graced by the spring-fed Wacissa and the lost Pinhook.

These woods and swamps boast as diverse a collection of botanical specimens as any place in the world not a rain forest. Sinkholes pierce the porous limestone underlying the jungle-like growth of oak, pine and palm, adding to the ancient mystery.

The treasures of this vast crescent, reaching almost 100,000 acres, lie deep. They are hidden from all but scientists, trained divers and special equipment. The knowledge hidden here is covered by a blanket of rotted plant life to a remarkable depth; a covering that provides anaerobic security for the remains of humans and animals waiting through centuries to tell the story of the settlement of North America.

This area has been of great interest to anthropologists, archeologists and other scientists for many years. The evidence they have gathered through several “digs” suggests eons of settlement by humans, possibly some of the earliest settlement in North America.

The pressing question developing as all of this evidence accumulates is whether or not the first settlement in North America came from the east or from the northwest. Could the first North American settlers have come across the ice from Europe? The answer lies waiting in the Flat Woods under a deep blanket of plant waste, protected by a lack of oxygen and waiting to be uncovered.

Florida Frontier: Aucilla River to the Pinhook
By Anne Holt
I arrived at 6 AM as instructed. Jack Carswell and I waited on the back veranda of his antebellum home sipping stand-up coffee out of real china cups and relaxing in the cool peaceful dimness of early morning. Surrounded by greenery and almost absolute silence, we discussed our planned trip to the Pinhook River, one of the wildest, most beautiful places in Florida.
Charlie Ward was our guide. He arrived promptly as agreed and refused coffee, urging us to hurry so we could catch the tide.
We climbed into his over-sized pick-up and headed south on the old Waukeena road. I sat in the back seat and listened to the two men remember limestone sinks, rivers disappearing underground, Native American sites and moonshiners, occasionally one waved a hand to indicate a vague location “just over there a few miles.”
Our route took us south and then west, parallel to the Gulf of Mexico along a narrow twisted trail through thick, brushy woods. Jack and Charlie talked about the old railroad that once carried cotton and other agricultural products from Monticello to the Gulf to be loaded on ships.
A smoky look hung over the Aucilla. It wasn’t quite a mist but everything looked a little gray. We boarded an open boat and headed south toward Apalachee Bay and in only a few hundred yards the sun came out to throw sparkles on the rippling water. Charlie picked his route along the curved riverbanks.
“There are sharp rocks hidden under the surface of this water. I’m following known channels to protect my boat. One of those jagged things could rip the bottom out.”
We soon entered a maze of channels between curving stretches of marsh grasses. Palms trees and an occasional twisted cedar or willow dot the savannas. Crab pots float along the route, here and there acting as channel markers. At the edge of the bay Charlie pointed out the route to Saint Marks Lighthouse and our destination, the almost hidden mouth of the Pinhook River.
Winding our way through the reeds and rocky areas, we twice saw large alligators. In two places mullet jumped out of the water with a flash every few feet.
Charlie explained that the whole Pinhook area boasts little soil but is mostly limestone. As we progressed up the river, we could see the rocky banks under the reeds and grass. Trees rooted directly into slabs of moss-covered stone hung over the water, closing out the sun. The river narrowed and banks closed in, suddenly our boat stopped, the keel caught on a fallen tree lying across the river.
We finally turned around and headed back through the tunnel of trees hanging out from the riverbanks. Returning to the bay we turned north, back into the Aucilla and saw a gathering of Wood Storks resting on the limbs of a dead tree. I counted nine birds. One particular stork turned his back and spread his wings. He appeared to pose as I snapped shot after shot. Ward said “Wood storks sometimes show a wing span of eight feet.”
The sun brightened as we headed up the river. Reflections of overhanging tree limbs cast patterns on the water. We turned left at Ward Island and Charlie stopped at a floating dock to tie up. Pointing to a path up the hill, he explained, “Climb up and you can see a real family fishing cabin. Those folks had to haul every stick of that lumber in here on a boat.”
Gray and weathered, the three-story structure looked shabby but sturdy. A covered porch ran all the way across one side of the building with a line of chairs backed up to the wall. I could picture a family enjoying the solitude–adults on the porch and children yelling and playing in the woods nearby.
Returning to the boat we continued up the Aucilla to the Route 98 bridge where we turned to go back to the boat landing. Markers hung in spots where fishermen found good luck. In this area they mostly catch catfish.
Two cabins sit on the high bank of Ward Island. They looked deserted to me, but no-trespassing signs hang on the trees and chairs are placed out front facing the river. Charlie and Jack said the buildings weren’t deserted–just neglected—when people come to the river they don’t have time to work on buildings, they only have time to fish or sit and think about fishing.
A large part of Jefferson County is like this area, still a natural environment—terrain unchanged in hundreds, perhaps thousands of years. Much of the route we covered on this trip is “Frontier Florida,” a land and waterscape untouched and undamaged, rare and wildly beautiful, a privilege to see.
When we returned to the quiet, tree-lined streets of Monticello I thanked Jack Carswell who arranged this trip so I could see and appreciate the treasures of this lovely place—this hidden, primitive, frontier Florida. I shook hands with Charlie Ward, fisherman, hunter and guide, and envied him his access to this almost unknown beauty. 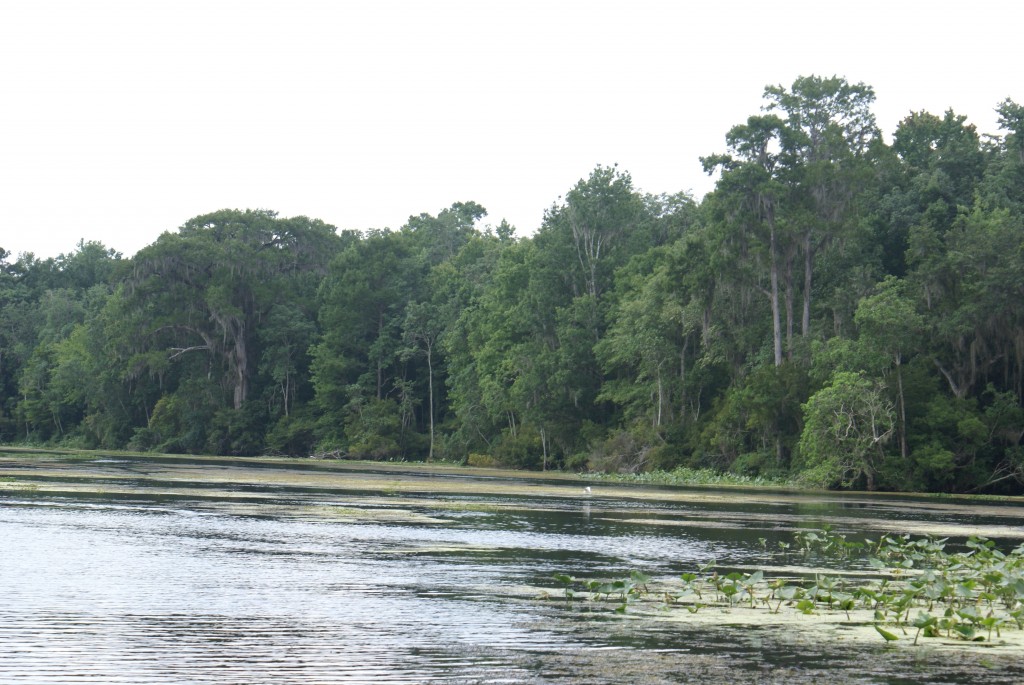 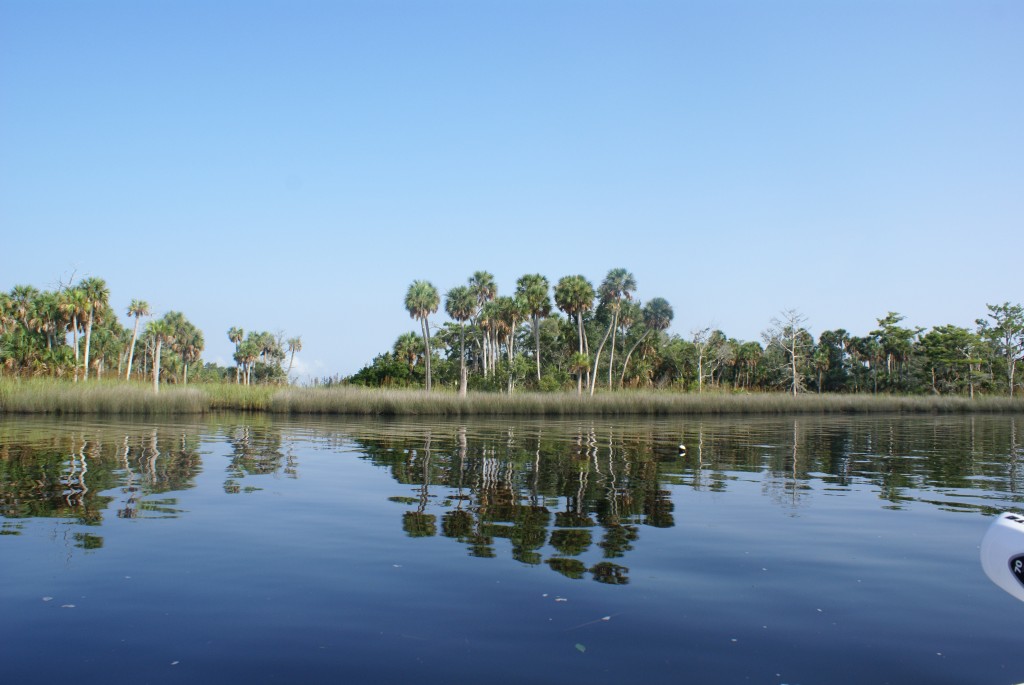